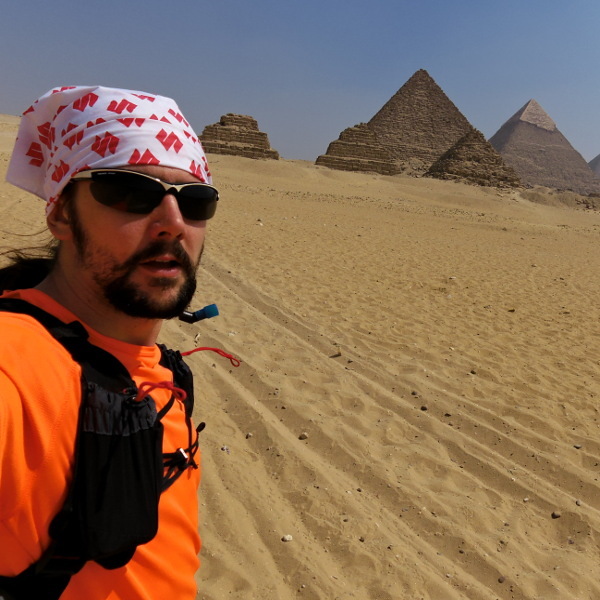 Long overdue post about running in Cairo and Giza

It has nearly been a year, since I've visited Egypt for the first time, and 6 months since I've returned for a couple of days again. Ever since, I wanted to write down my experiences, but life kept me busy. However, today I moved my blog to this new platform (Github pages), and I thought, that this topic would be perfect for a "debuting post". So, without further ado, let's see, how I managed to get some kilometers done at one of the most historic places I've ever been.

Those who know me, or have been reading this blog, know that I like to explore new places via running. And when I got to places mentioned in my 4th grade history book, I did exactly that, just as the video shows above.

If You wouldn't know, Cairo is a HUGE city. Really. According to the all-knowing Wikipedia, the population is around 19 million people, so one would assume, that it is pretty easy to find a local running club, and explore the city via running in a safe and enjoyable way with them. When I googled, I was pretty surprised to find only a handful of clubs online. The biggest and most famous is the group called Cairo Runners. Allegedly, more than 3 thousand runners attend to some of their joint runs, which is shocking. Other groups are the Maadi Runners and the Zamalek Runners. There is also a triathlete group called Maadi Athletes.

Naturally, I've contacted all of them on facebook, and if You plan to visit the city, I strongly suggest You to do the same. All of them replied, and was really friendly and helpful. Unfortunately, most of their trainings / community runs clashed with my work, moreover, their meeting place was usually far from my hotel located in Zamalek, and transportation can be a bit tricky in the city. Anyhow, I managed to attend to a morning run with the Zamalek Runners, who usually meet up early in the morning on the eastern side of the island and have a 7-8 km long run around the island. 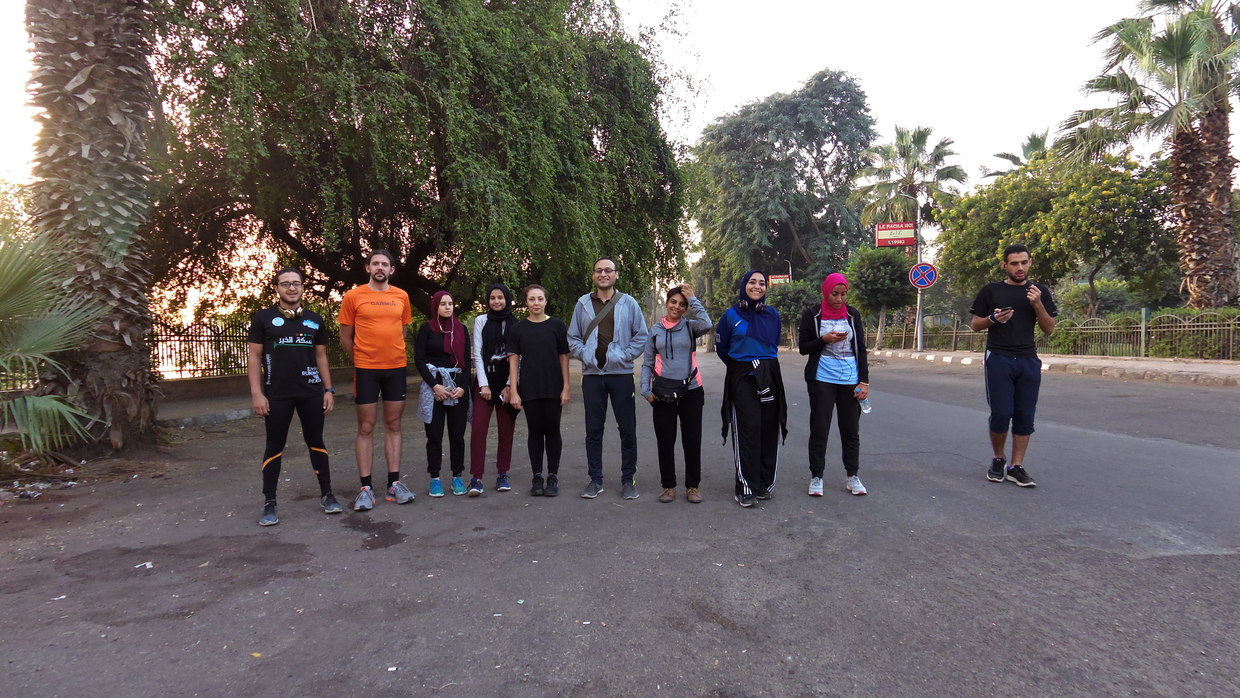 I only managed to attend once, but it was totally worth it. The people were on different training levels, but everybody was friendly. I ended up running with these young ladies, who struggled a lot after months of inactivity, but covered the whole distance in the end :-) 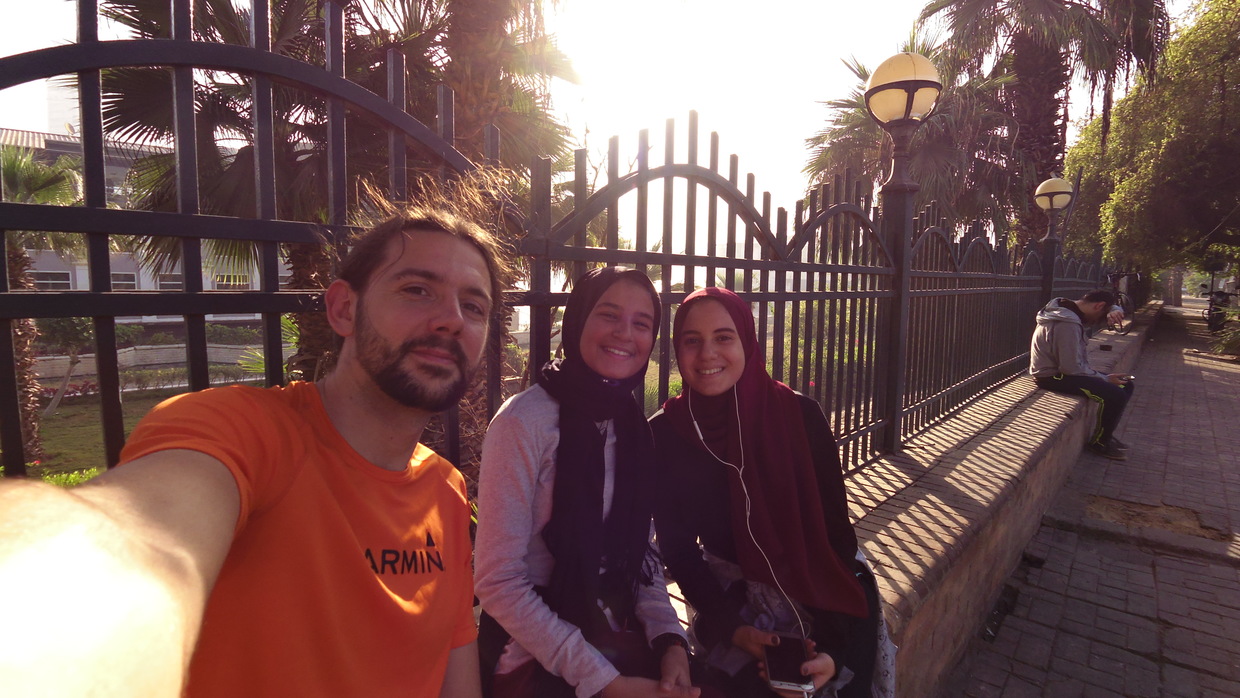 I ran a few other times around Zamalek alone, as I was told, it is safe area, with all the embassies and whatnot. Moreover, it is pretty difficult to get lost until You leave the island, and the whole roundtrip is around 9k, which is a perfect distance for a morning jog. Regarding the scenery, I had mixed feelings. On one side, there are beautiful buildings and obviously, it is a big experience to run next to the Nile, which could be considered one of the most important rivers in human history. On the other hand, the infrastructure often feels abandoned. This photo below nicely summarizes those mixed impressions. 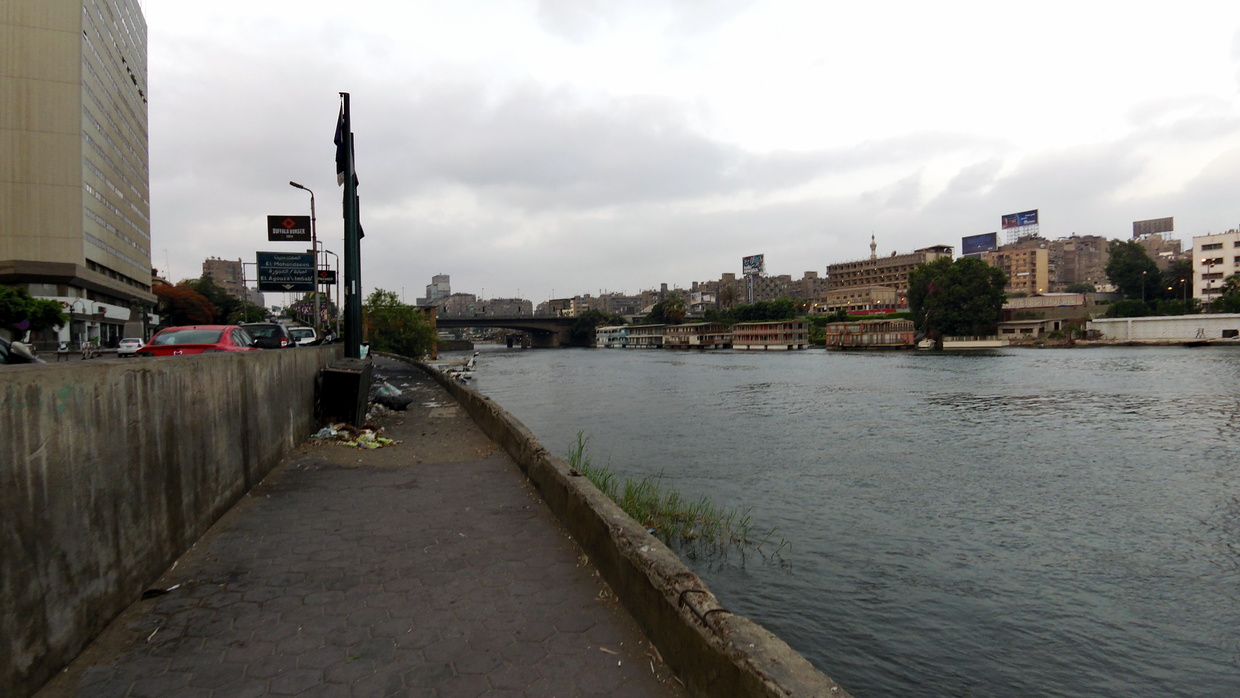 There is, however, one aspect of running in Cairo, that You should absolutely consider: the air quality is really, really bad. And this is the biggest reason, why I haven't got many kilometers done during my visits. I like my lungs, and I could feel an urge for coughing even when I left early in the morning before the heavy traffic starts. Also, do not listen to music in both ears while running in Cairo. You often have to run on the street next to the cars, and the drivers, well... let's just say, everybody is more happy if You pay attention to Your surroundings.

On one of the mornings I ended up in a nice sport center, that is located in the heart of Zamalek. Unfortunately I can't remember, how much the entry fee was, but something around $1 or so. There is a nice and wide 2k long track around, and You can see many other people doing other sports such as horse riding, boxing, football, basketball, etc. The surrounding of the track is pretty green, but that unfortunately doesn't solve the air pollution problem. Regardless, it is a nice, cheap, and safe place to get some training done. 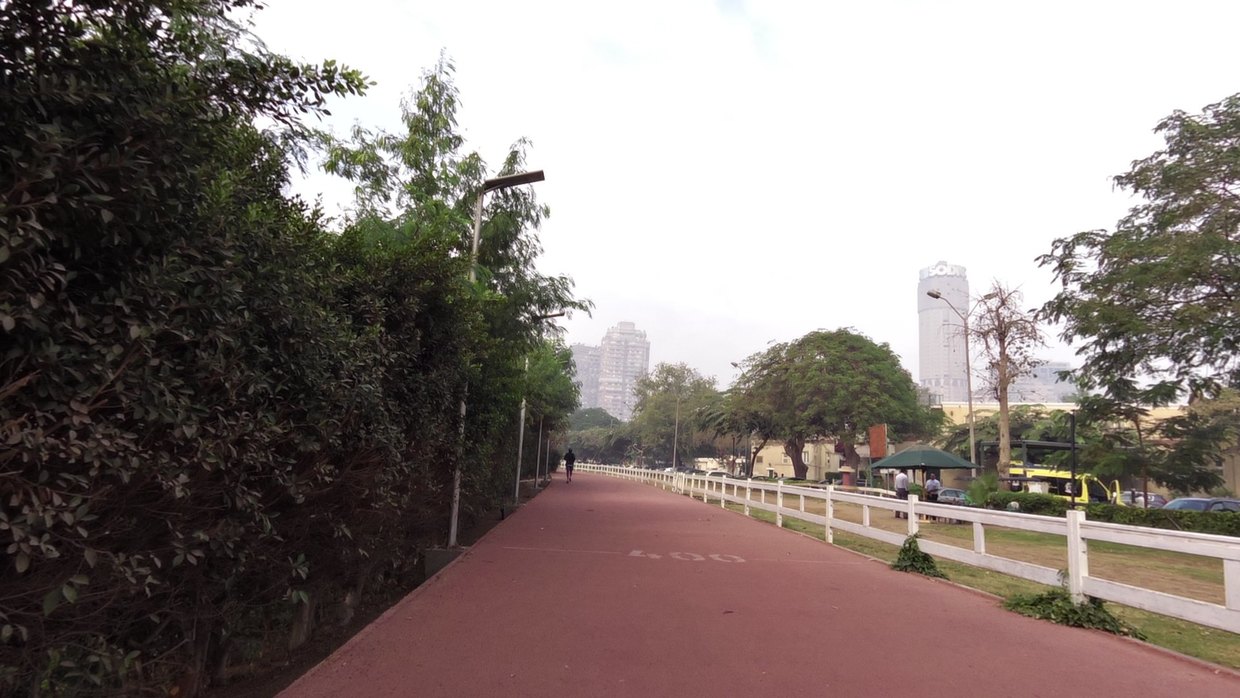 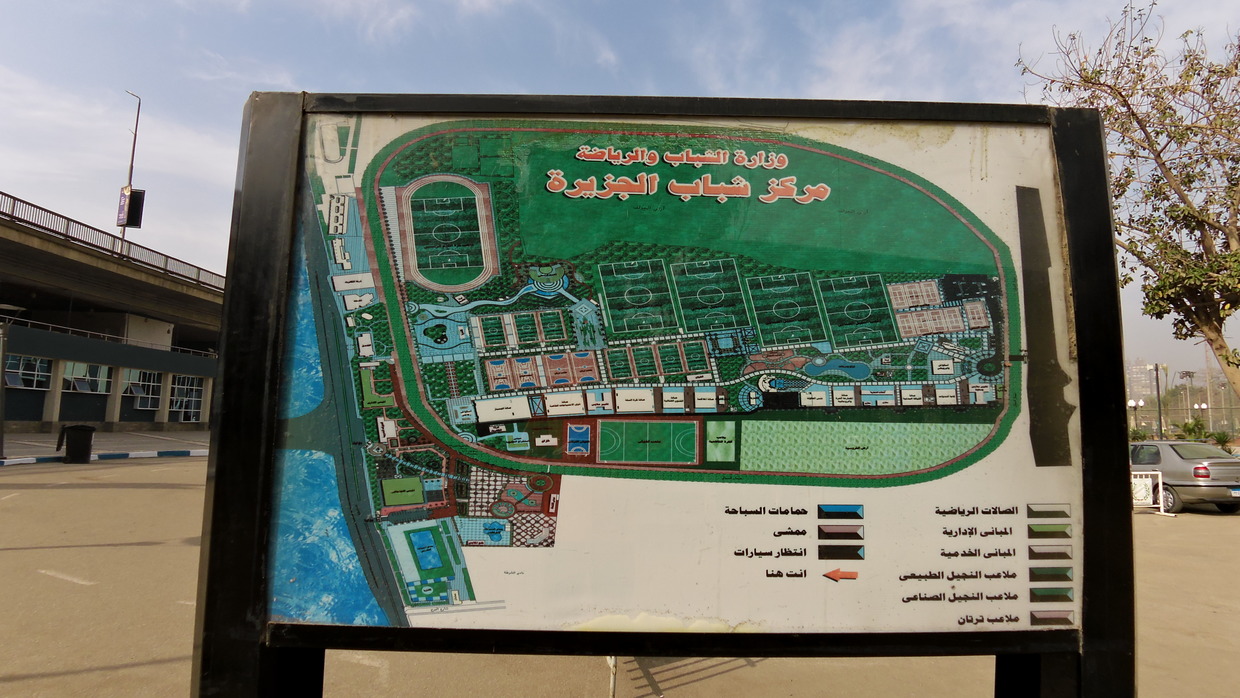 Ultimately, my advice is to run around the island once really early in the morning, and maybe go for a round or two at the sports club. Then, put Your running shoes away, save Your lungs, and spend more time at the Great Egyptian Museum instead.

Running at the Pyramids

When my friends in Cairo asked me, what kind of social and cultural programs I would like to have, my answer was simple: please let me run around the Pyramids! I've checked, that they are not so far away from my hotel, within a running distance, but I was quickly dissuaded from that idea. Anyhow, my friends took me to the Pyramids by car, and I only asked for 1 hour to run around all of them, and then we can head back to the hotel for a quick shower, and then to work. 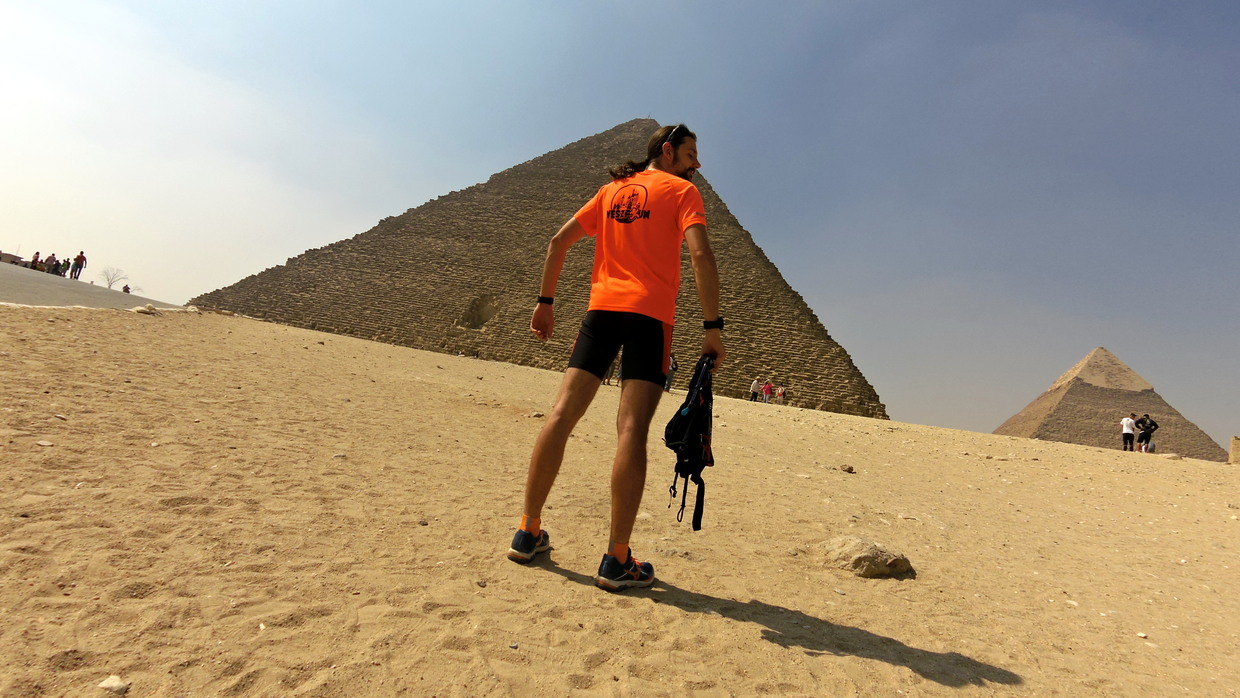 After taking this mandatory photo in my running clubs T-shirt above, I headed off to do my 60 minute run at the most ancient site I've ever been, not to mention running in the desert. What can I say, this one hour was amazing. Many gave me strange eyes, as it is not that common to see a guy in running gear hasting up-and-down there, but I didn't really care. The Pyramids and the Sphinx were magnificent. I had a strong urge to climb one of the bigger Pyramids, but obviously it is not allowed. Instead, I climbed a small dune in close proximity, which allowed me to take this shot: 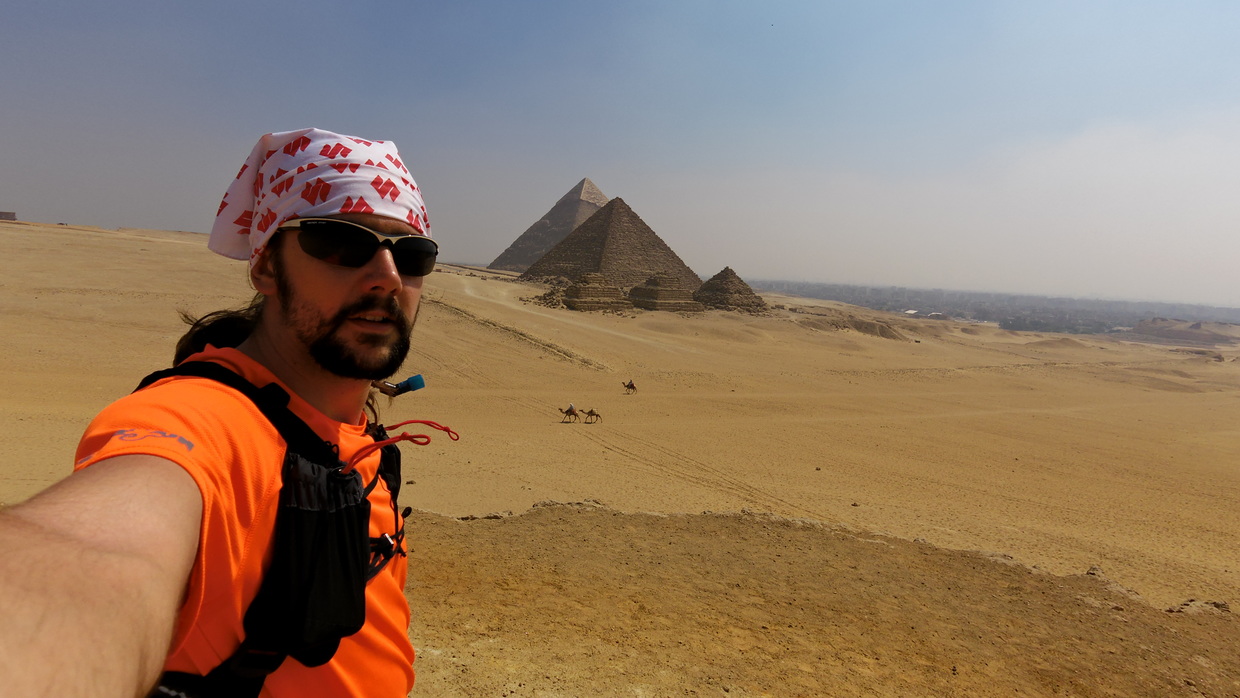 From the photo above, it is also pretty easy to see, how close the city is to this site. The view of the Pyramids is something that photos can obviously nod replicate. But, if I want to be honest, the best part of my run was, when I was roaming in the maze of catacombs. That was pretty damn adventurous. Unfortunately, the video footage of that on my camera got corrupted, but the bottom of the picture below kind of shows what it was like at some places. 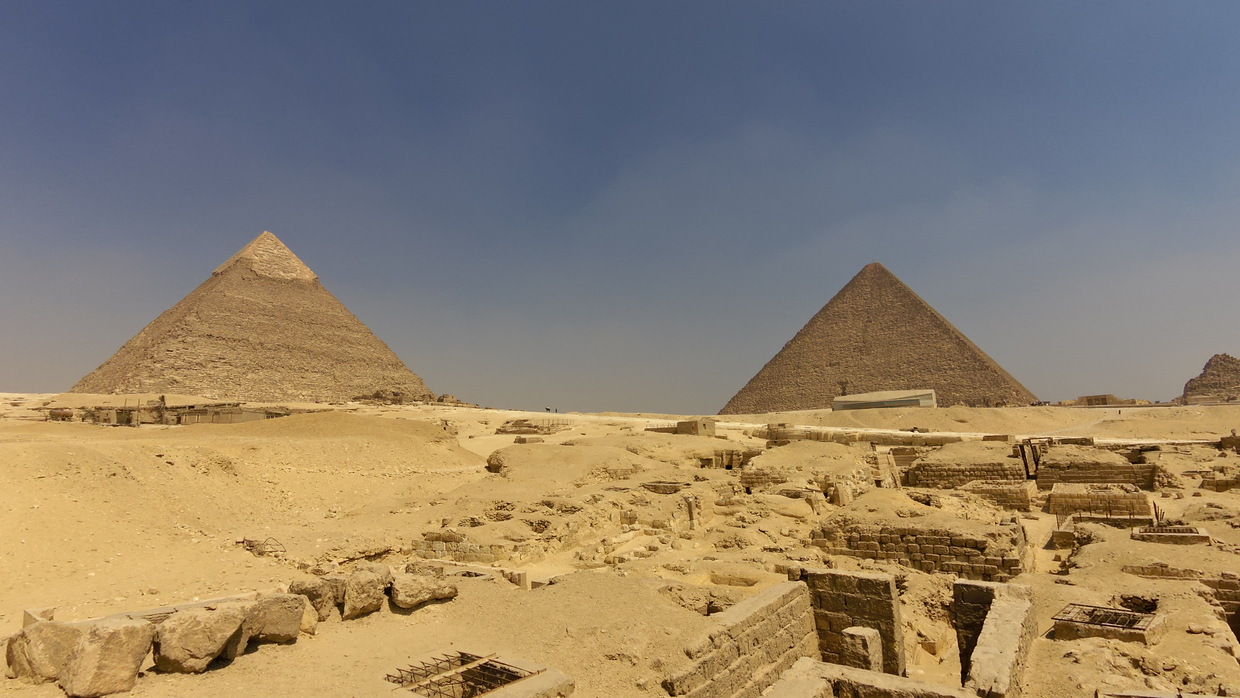 Running in the desert wasn't that exhausting as I anticipated, and the air quality was also much better than in the city. The only downside (besides having no shade at all) was that the area is too small. I'd have loved, if I had to run 5k or more to get close to the next Pyramid. And yeah, those seem to be rather small on the above picture, but that is not the case. Take a look at this one, where You can see a small parking place for cars at the bottom left corner of the pyramid. 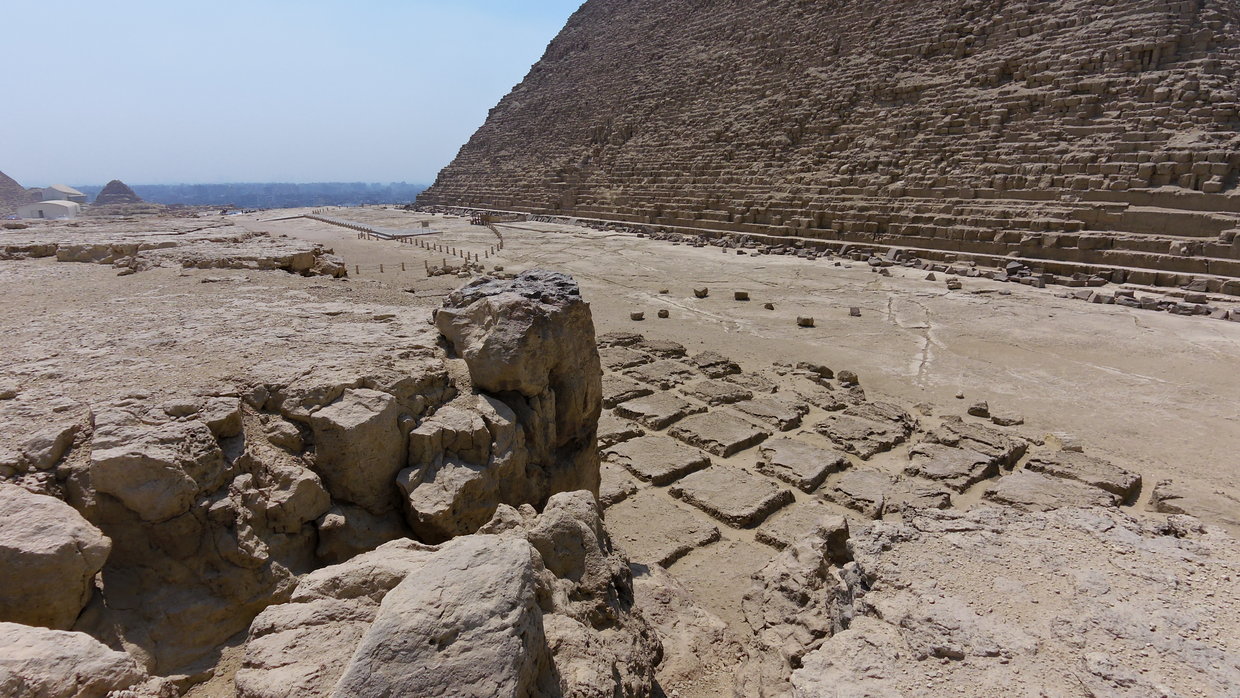 Bottom line: running around the pyramids is a bit weird, but it was definitely fun for me. If You decide to do the same, don't forget to bring enough water, as it can be really hot on the open sun.

I was thinking about whether I would bring along my running shoes, if I were to travel to Cairo again. I'm pretty certain, I'd join the Zamalek Runners if I could, but other than that, I would only go out if I manage to get to the countryside. Egypt is a big country and there are other wonderful sites, that could be explored.