Top 6 RunKeeper features/bugfixes I long for

I could (and maybe I will) write a long post about why I chose RunKeeper as my (main) tracker application, and health database. I made this decision for over two years now, and I still believe that RunKeeper and its HealthGraph is the most suited to me (although sometimes I use other compatible apps for tracking such as AeroTrackerPro or Zombies, Run!).

This being said, there are quiet a few features I miss, and bugs that annoys me. I present a 6 item top list of them below, but please, keep in mind, that despite the seemingly negative attitude, the purpose of this article is to provide constructive ideas, suggestions. And why 6 not 5 or 10? Because 6 is perfect.

Ok, this is a silly one, just to kick of the list. I am obsessed with checking my stats page (Reports) on the web interface of RunKeeper. If I see, that the column is not high enough, it urges me to go out for a run, bicycle ride, or something. You must always try to outperform the last month. Always. 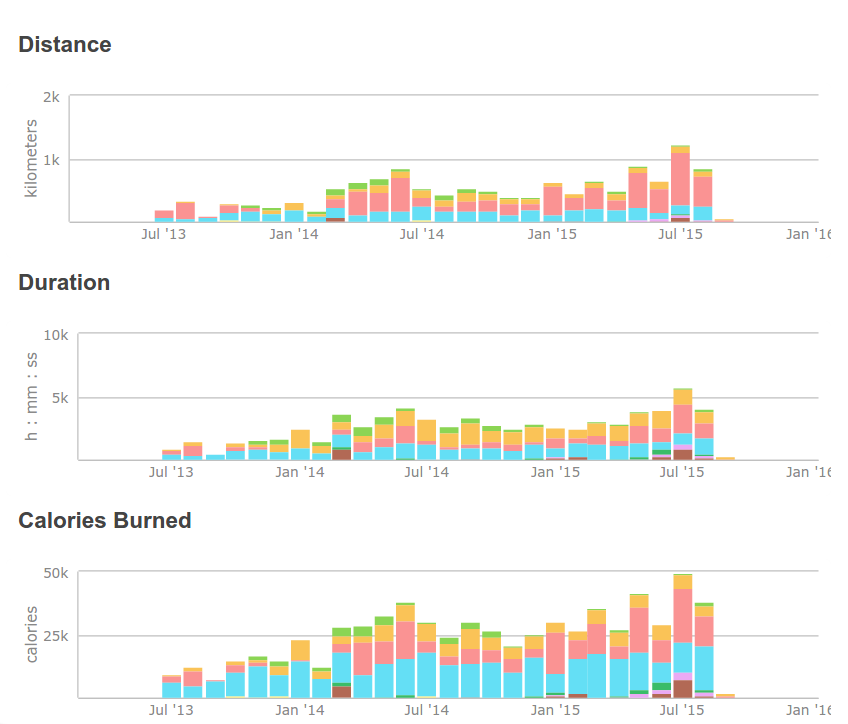 The only thing that annoys me is the color selection for the different type of activities in the chart. The colors depend on the types of Your last activities. The type of Your last activity will get green, the second last will be yellow, etc. This is true for the order of the types as well. I can understand the underlying idea, that the colors green, yellow, and red should be used the most, but I would prefer a more consistent chart. Implementing a chart that uses the same order and same colors all the time would actually be much simpler too. Personalizing it (colors, order of types) is not a must, but it would also be nice.

Still just something that is not a must have feature, but it would be very nice to have sometimes. Time to time I want to show an earlier activity of mine to somebody else, or just look it up for myself. The reason could be the route of the activity, the photos I took abroad, comparison with an other activity, etc. 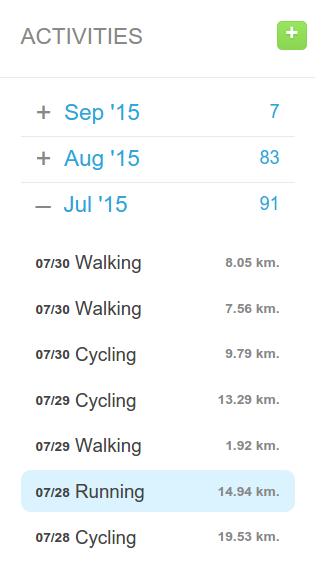 However, the only possible way of doing this at the moment is to remember the exact date (or at least the month and the distance), as RunKeeper does not provide any search functionality on their web interface. RunKeeper folk, I would really love to be able to make searches like this, so please make them happen:

This is the first serious issue, that also affects “performance” not just the comfort. Auto pause seems to be a nice feature if You don't have a Pebble or a Magellan Echo, and You like to stash Your phone away during exercise, but have a lot of stops due to traffic lights, water taps, etc. The feature is simple, when You stop moving, the activity is paused, and it is resumed when You start again. So far, so good. If You have ever used this feature, You know that the audio cues for auto-pause are being played a few seconds after the actual stop or restart. In my opinion, this is acceptable, as RunKeeper, and all the other tracking apps try to save battery by sparse GPS sampling, thus they definitely need this time in order to make sure, You really stopped.
What I don't understand however, is why the track looks something like this: 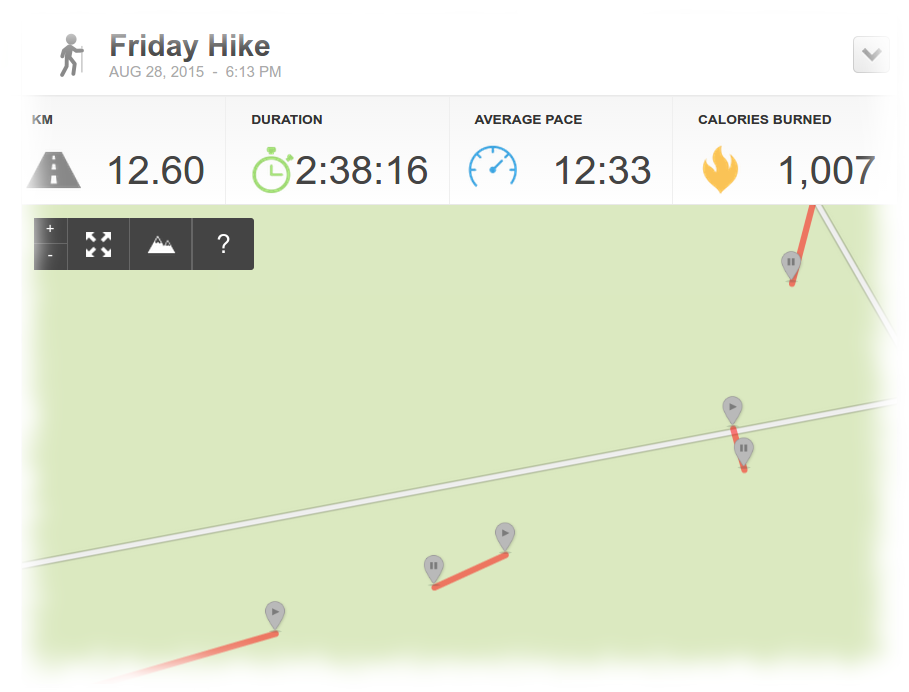 I believe, that when the app makes sure, that one has resumed to running, it should include the GPS coordinates of the stop as the starting point of the new section. This little tweak would provide a much nicer and much more accurate track after the run, and it would need only a few lines of code to be implemented. Also, instead of having e.g. landscape and portrait mode selection during an exercise, it would be much more useful to be able to toggle auto-pause mode.

Audio cues can be helpful or annoying, depending on the actual activity You are doing. It is rather important, if You are having a serious training session, but pretty much disturbing in case of having a fun run with others. Moreover, one probably needs rather different information during different types of activities: knowing the split and average pace during running after each 5 minutes is a nice thing to do, but it is meaningless in case of a 100 km bike ride. In the latter case one may be interested in the split and average speed after each 5 km or so. 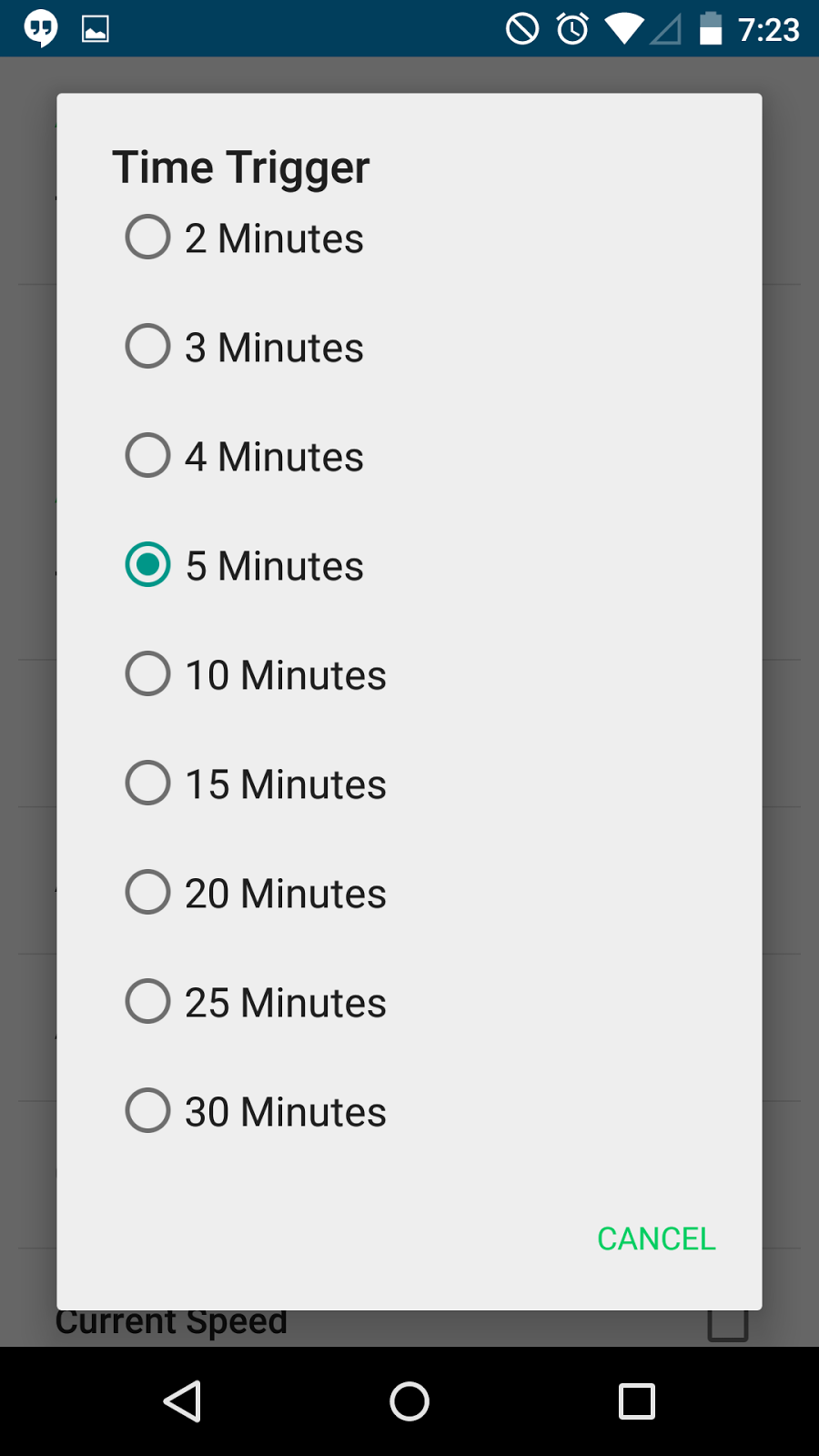 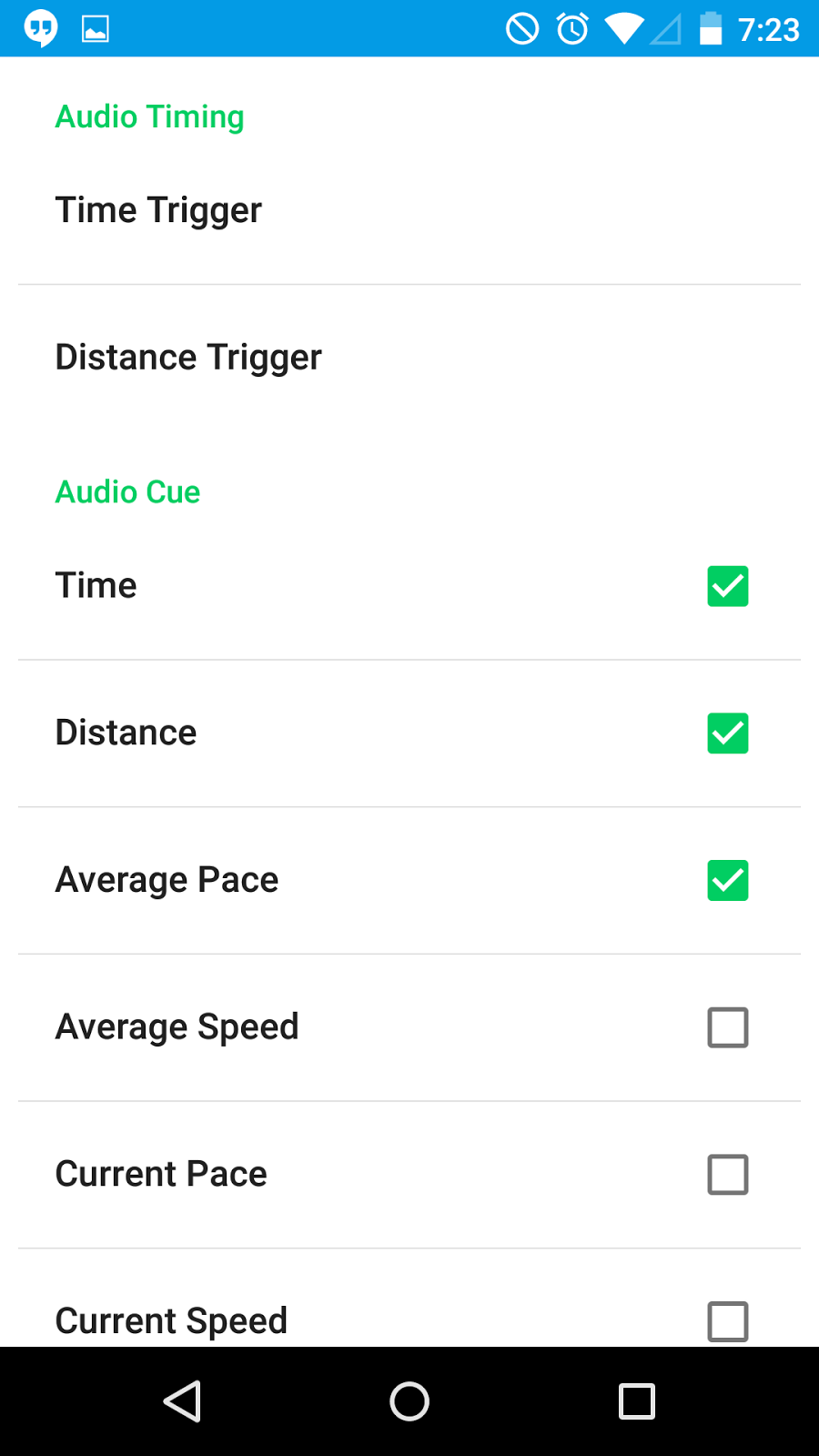 Changing the audio cue settings in RunKeeper is rather cumbersome, and I usually just mute my phone as a workaround whenever I don't want to hear them. Especially, because this setting can not be changed during an exercise. It would be really nice to be able to create different audio cue profiles, and one could select the most suited one before (and maybe during) an exercise the same way as routes and workouts are selected.

Routes provide a nice tool for the comparing the performance on different occasions with the same track. From the social point of view, one can take routes from others, modify them, which can be helpful when running at an unfamiliar place. Voting on routes could further improve this feature, however, a much more important benefit of this feature is available inherently: You can plan a track beforehand on the map using the web interface, and follow it during the run. This could be especially helpful if You are having a vacation in an other city, etc. 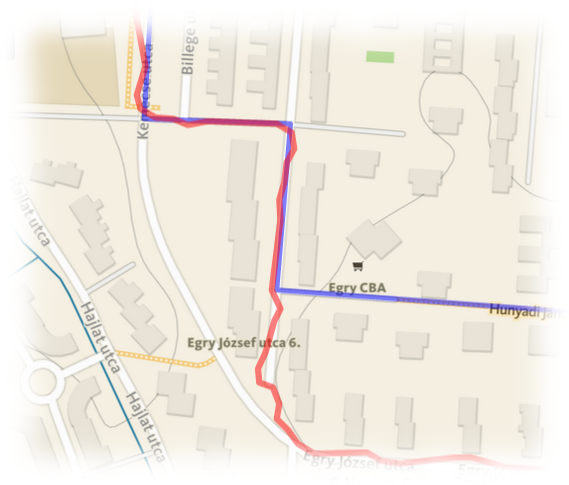 I try to use this feature plenty of times, but there is a very annoying bug/misbehaviour to that: whenever I zoom to my current location on the map view to find out, in which direction I should go, the view does not remain put, it immediately zooms out when the next GPS position is evaluated, so that the whole route should be visible. Personally, I see no point to that, but it makes getting the directions very troublesome. Also, having navigation in audio cues like “take the next turn left on whatever avenue” would be awesome, but maybe a bit overkill, and definitely a big job to implement. However, it does not seem to be very complicated to give an (optional) beep, whenever the user leaves the predefined route farther than a threshold value.

I believe that many of You will agree with me, that gear tracking is the most needed new feature for runners. It doesn't matter if You run 100k a week in 3 different shoes, or go out occasionally in the same one, it is always important to have a rough idea, how much our shoes have been used so far. Gears should be assigned to activities in the same way routes or workouts are. 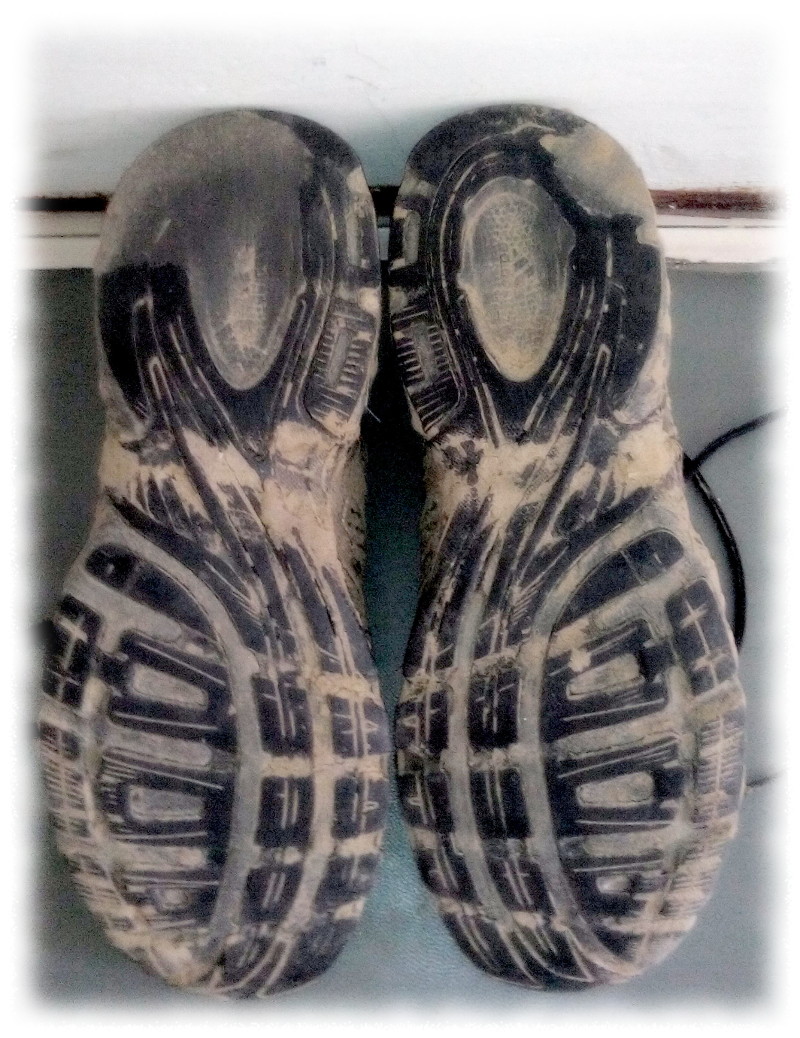 This is rather simple to implement and it could be beneficial for skaters, cyclists, swimmers too. I would be very interested for example, how many kilometers my skate wheels can endure, how many times I've used (and washed) a certain pair of compression socks, etc.

Do You agree with my list? What else would You include? Let me know in comments below.

And as always: thanks for reading, +1s and shares are appreciated.