So last November I was having a chat on facebook with one of my friends, who is a competitive runner in 1500 and 3000 meters. The discussion was something like this: 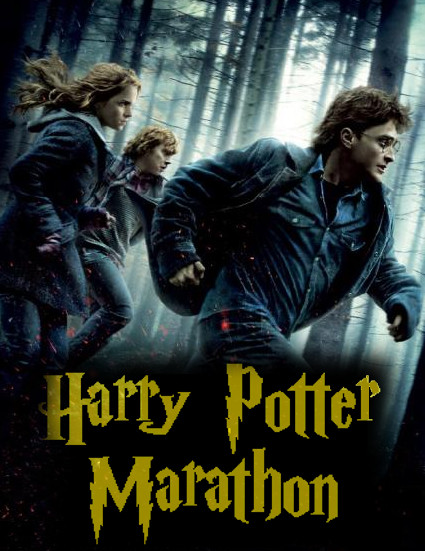 Her: Hi, sorry, I'll go soon. Me and my friends plan to do a “Hobbit marathon” in the afternoon.

Me: You mean watching all three movies in a row?

Me: Neat! I once had an idea of doing a similar thing with the Harry Potter movies. Only, I thought to run in the breaks between them. But the person to whom I told it said I was crazy.

Her: I think it sounds great!

So this is how it all began... Since my friend has a strict training plan, we had to wait a lot with the implementation of the idea, but it was worth it. We already agreed, that our “basis of operation” will be my flat, and we will have a 6k run between all the movies, resulting in exactly 42 kilometers. Also it has been a long time for both of us to watch these movies / read the books, so many things were foggy already.

Last week She told me, that they have a break with the trainings, so we could do the marathon this Monday and Tuesday. Then I started sorting out the details. Since the weather was “mordorish” in Hungary (nearly through the whole summer), we decided to start everything in the afternoon, and do the runnings in the night, when it is “only” 30 Celsius (86F) outside. Then I did some math:


So in the end, it doesn't really matter when we start. Next step was to plan the route for 6k runs. I wanted to have as much variety in the tracks as possible. This part was rather tricky, but in the end, I made 7 routes in RunKeeper. Here they are on top of each other (drawn by uMap): 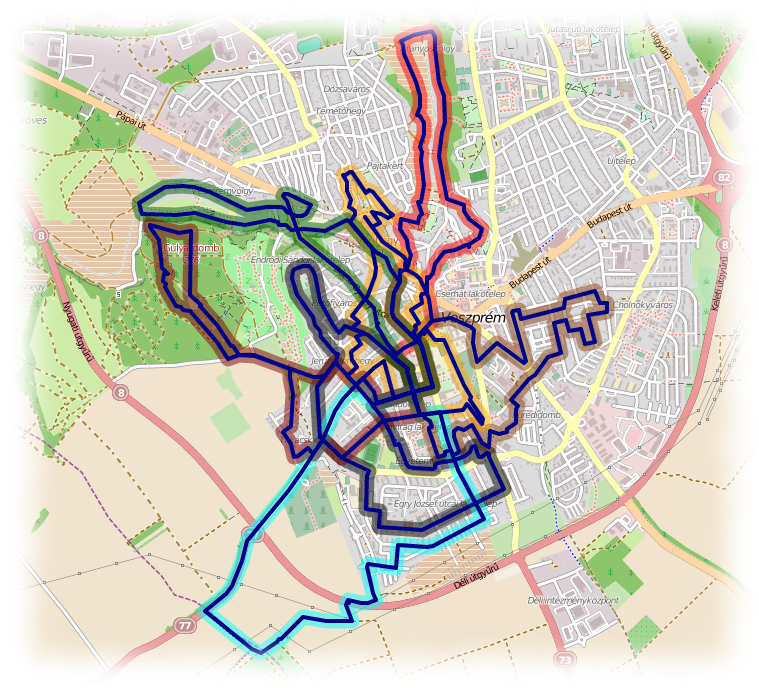 Everything was ready, and finally the day has come! First we went to supermarket to buy some biscuits, chocolates, fruits, etc. for the 24 hour challenge. Then, everything started around 3:30pm on Monday with

This one brought back a lot of memories from 10+ years ago. It was really funny to see the the now Queen of 9gag as a niminy-piminy little girl. Meanwhile, a really huge storm started, and didn't finish until the movie ended.

As it was still raining heavily, we skipped the first two planned tracks, that went into the forest, and started with the 3rd one. After weeks of sauna, it was really nice to run in the rain. Also, my friend is a much faster runner, than I am, so I probably did my PB for 6k.

After we got dry again, and hang the wet clothes, we started the second movie, and ordered a pizza, which arrived right before the movie ended. Both still cheerful, time went by pretty fast, and it got really dark outside, but the rain stopped at last.

Due to the rain and the late hours, it was really nice and quiet in the city, and this 6k went by smoothly as well.

Things are getting dark in the movies too. Also, this was the time we realized, that the movie watching part will be much more difficult than we expected. We were really waiting for that 6k to stretch our legs a little.

This was a really nice one, with a lot of elevation, visiting the castle, etc. Quickly done, ready for the Triwizard tournament!

This was the most crazy track I planned in a way. The basic concept was to turn left, then turn right, and repeat. Anyway, at 3k we were halfway through, and finished around 4 am.

Dumbledore's army! Seriously, this was my favorite book. I think this was the book, in which I could find the most analogy with real life. The relation of politics and education, media cover-ups, etc. Annoyingly lovable.

My friend had to be at the bus station at 8:30 am, thus we decided to have a 90 minute nap, and then start with the track that goes close by. Because of this detour and a non-existing path, we ended up running 7k instead of 6, but it was nice, though the city was already awake.

Despite the short nap, we both were already really exhausted, but luckily, a friend of ours joined for this one. Halfway through,my friend got a message, that She will have a training session in the afternoon, so She had to stop here, and go to have some sleep before that.

My friend motivated me a lot during everything so far, so I was pretty sad to left alone. Anyway, I decided to do the last two runs right after each other, have a shower, then watch the movies made from the last book together lying in my bed. And this is exactly what I did. Although I was much slower than previously (due to the absence of my friend), but these were the trail running tracks, so I loved them. Also, at least the last one was above 5 min/km, thus lasted more than 30 minutes and counted towards my Pact. By a coincidence, I met one of my friends in the forest during my last 6k, so in the end, I had company.

I have to be honest, even after having a shower I was really not in the mood of watching movies for an other 4 hours, but I couldn't quit at that point. So I did not. I was yawning all the time, but somehow the time went by, and I never thought I'd be so happy to see Albus Severus Potter one day. And then, I had my well deserved sleep :-) I don't remember much from the dreams, but one thing is clear: just as I fall asleep, in a couple of minutes, people started waving wands there too...

And what about You, have You done anything similar before? If yes, how was it? If not, did this post get You in the mood to do so? Which movies will You chose? What would You do different? Let me know in the comments, and as always, thanks for reading.

P.S.: If You choose HP, don't forget to order some of Bertie Bott's Every Flavour Beans! We did unfortunately :(